Rafa the Pomeranian turns eight in August.  When I accidentally acquired Rafa in the summer of 2011 (Happy Birthday to me!), Second Chance Animal Rescue thought he was about three.  I decided his birthday would be August 8, a date he shares with my friends, Jen and Rollin. 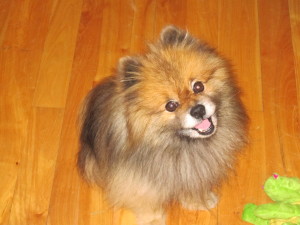 Cute, amirite? Doesn’t look like the type of dude who would gnaw off your arm.

Rafa is a pretty good dog.  He likes people.  He doesn’t bite children.  He barks like crazy at other dogs but he’s super cute and fuzzy so no one cares.  Much.  Rafa loves to sit on a pitcher’s mound of dirt, gazing at the neighbors’ back door, patiently waiting for their dogs to be released so he can BARK LIKE CRAZY and zip up and down along the fence line, talking about how he wants to rip them apart and munch on their lovely furry legs.

His cough worsened to the point that he was waking up at 5 am hacking.  5 am is not a good time for me.  The vet said Rafa’s murmur was louder and he wanted an xray.  The xray showed an enlarged heart that was probably compressing the trachea.  Our vet suggested a cardiac echo ($400).  I suggested a trial of medications (??$$).

Ace and I bothered to listen to Rafa’s heart.  Generally, one hopes to hear a Lub and a Dub.  Rafa’s Lub and Dub are obscured by a WHOOSH.  Holy cow.

So here’s the theory: Rafa had a mildly leaky mitral valve.  The valve wore out over time and now he has significant mitral regurgitation, where the blood isn’t effectively pumped from one chamber to the next.  Inefficient pumping means more blood is pooling, stretching out the chambers of the heart.  And the enlarged heart mashes on his trachea and makes him cough.

I’m getting some good practice for old age, anyone’s old age, could be my parents, could be my husband.  Here is Rafa’s med list:

2)    Salix (human Lasix) 12.5 mg one or two tabs up to every six hours for symptoms of volume overload

3)    Dextromethorphan (plain, not with Guiafenesin) 13 mg as needed for cough

4)    Hydrocodone (?mg) ¼ tab (I accidentally gave him one tab for each of the first three nights – fortunately he kept breathing) up to every six hours

That was the initial list.  Then I decided to do a little research on the internet.  (Oooh, did you feel the vet roll his eyes?)  I found a lovely review of the research on the utility of Taurine and L-Carnitine supplementation in canines with cardiomyopathy.  And fish oil helps, too! 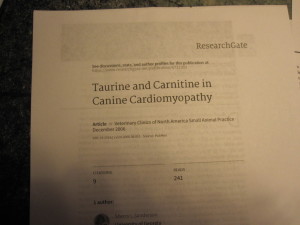 Off to Mastel’s Health Food Store.  The ladies at Mastel’s were extraordinarily helpful, showed me their pet supplement section, and assisted with finding appropriate preparations of Taurine, L-Carnitine, and fish oil.  If you have any supplement needs, I highly recommend this joint.

I called the vet and left a message about the supplements.  And I asked for antibiotics.  Basically, I want to leave no medicinal stone unturned.  I really don’t think my poor furbaby has kennel cough, but if he does, I wish to blast it to kingdom come with massive nuclear devices.

Janna, my holistic vet friend in Wisconsin, suggested adding 9) Vitamin E and 10) Selenium as well.  I will eventually. 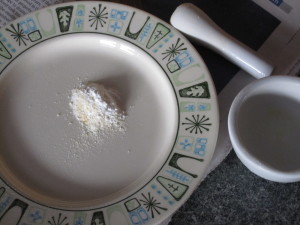 Step One – grind pills to powder 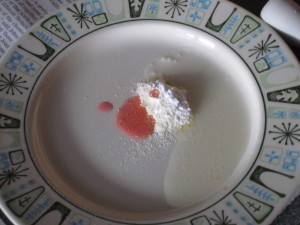 The morning routine consists of grinding everything but the fish oil and dextromethorphan with a mortar and pestle, dumping in the fish oil and DM, stirring the mess into a slurry, and adding half a teaspoon of unsalted peanut butter. 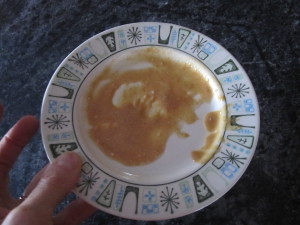 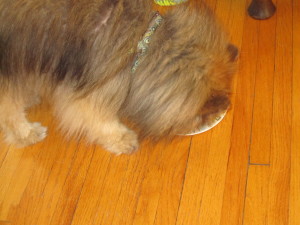 Step Four – Pomeranian narfs it up

I’m not sure if he’s getting better.  He’s not as vigorous on our walks.  He still wakes up coughing each morning and coughs in fits throughout the day.  When I pick him up to snuggle him, I have to be extra special careful.

My dog is getting better medical care than many humans, even in the US.  I feel a bit sheepish/doggish about this fact, like I’m privileged.  I am privileged, privileged to enjoy the company of the World’s Largest Pomeranian, privileged to be in a position to try to help him enjoy good health. 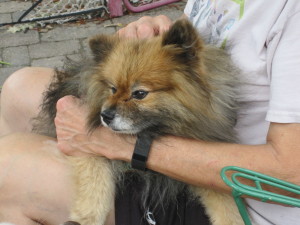 Getting some love from Grampa. 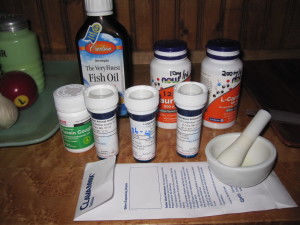 The Big Pile. So far.

This entry was posted in Blog and tagged dogs, love, Rafa. Bookmark the permalink.