Numerous publications ran articles last week regarding the extreme prices some parents are willing to pay to get their paws on Disney’s sold-out Elsa dress.  For those living in sublime ignorance of this consumerist lovefest and the movie upon which it is based, allow me to shed the tiniest bit of illumination.

Elsa, the elder sister in the movie Frozen, possesses unpredictable cryogenic superpowers.  Instead of helping their daughter harness her unique abilities, her idiot parents basically put her in solitary confinement.  A couple years pass, and Elsa banishes herself from the kingdom, believing that she is a danger to society.  She builds herself a secluded castle of ice and, despite the fact that she skipped town with no luggage, she gets to waltz around the frigid floors in an awesome aquamarine dress.  (Elsa also has no apparent source of food – don’t even get me started.)

Disney is a master of merchandising.  You can dress your impressionable child like Jasmine, Belle, Ariel, Rapunzel, Snow White, Mulan, Tiana, etc. ad nauseum.  Buoyed by the success of the movie, American children gobbled up a bazillion Elsa dresses, including a special fancy “limited edition” from Disney.  Now they’re gone and some parents are forking over $1600 on eBay to get the stupid dress.  Seriously?

I remember exactly one toy that I absolutely positively HAD TO OWN: Baby Alive.  If I could make those two words flash pink and shower you with glitter and streamers I would.  Anyone alive in the 70s can likely recall the jingle – “Baby Alive, soft and sweet.  She can drink, she can eat.” – an earworm masterpiece created by someone at the Kenner company.

My mother wisely refused to buy me the doll.  And gee, I still love her (my mother) and regularly speak to her.  Baby Alive was not on my taped-to-the-fridge list of preapproved expenditures.  For those of you who are curious, the list included record albums, dried fruit, select books, and granola.  I kid you not.

After serious discussion, my parents decided I could purchase Baby Alive for myself.  Being the kind of kid who routinely loaned her parents money from her accumulated pile of allowance, I was ready to head immediately to Target.  I dropped $6, a veritable fortune.

Baby Alive didn’t live up to the hype.  Shocking.  I mixed her packets of “food” with water and spooned the disgusting gruel down her gaping mouth.  I don’t recall whether the jingle exposed the pièce de résistance: Baby Alive poops out whatever you put in her mouth!  Unchanged!  How cool is that?

I ran the feeding experiment once.  After that, I fed Baby Alive in the same manner I fed all my other dolls and stuffed animals – using my imagination.

Baby Alive did not have a profound influence on my life.  She didn’t attend my high school graduation.  I did not pack her in my suitcase when I moved to Oberlin for college.   (Though I did pack Pink Satin, a pillow and handstitched satin case made for me by my grandma.  I slept with Pink Satin for decades until the down filling disintegrated into dust and the overlying pillow fabric fell apart.  I still have the case.)  I didn’t thank Baby Alive for her support when I graduated from medical school and she was not a ringbearer at my wedding.

The aforementioned articles quoted parents who were thrilled that they could make their  daughters so happy.  Even at a cost of over a thousand dollars.  You’re about to tell me that I’m sounding more preachy and judgmental than usual.  Why yes, thanks for noticing.  I also sound a little hypocritical because, as my family can attest, I. LOVE. STUFF.

Want our kids to be happy?  Here are some ideas.  Spend time, not money.  Accumulate verbs together (cooking, jumping rope, making music, reading) instead of nouns.  Help them learn to create, not consume.  Teach and model healthy decision making, money management, and delayed gratification.  Attach value to people, not possessions.  Follow Elsa’s advice and let it go.

As your reward for sticking with me during my whiny rant, here is a preview of Thursday’s blog post. 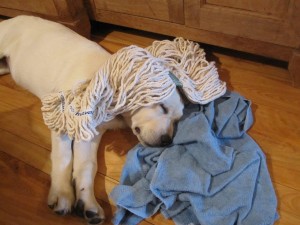 Recognize that long blond hair?  Do those colors look familiar? 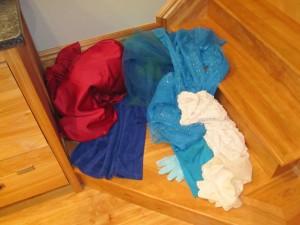 This entry was posted in Blog and tagged consumerism, Disney, Elsa's Dress, parenting. Bookmark the permalink.