The Joy of Text: How Diana Gabaldon Changed My Life

I’m not a bookworm.  I did not spend childhood with my nose buried in the pages of Harry Potter or the Magic Treehouse series or Wimpy Kid.  Sure, plenty of great books existed in the dark ages of my youth.  I retain nostalgic attachment to Lloyd Alexander’s assistant pig-keeper, Taran, and I adored Andrew Henry’s Meadow.

In high school, I read the required Invisible Man, David Copperfield, and Pride and Prejudice.  I’m sure I’ll alienate half of you by admitting that I really couldn’t stand Jane Austen.  Mr. Darcy’s approach to romance left me colder than January in Minnesota and without the occasional blinding sun.  The dude surely meets DSM criteria for Narcissistic Personality Disorder.  (I’m just not buying that he only appears that way because he was written from Miss Bennet’s perspective.)

Honestly, I can’t recall reading anything outside of school all through my teen years.  At least not books.  I read plenty of music.  Schumann and Rachmaninoff and Dello Joio and Mozart and Debussy and Mussorgsky and Bach and Brahms.  If practicing the piano is reading, I read a lot.

Oberlin brought an endless syllabus of reading.  I consumed all of it, every last paragraph, diligently outlining my notes for later reference.  I earned the worst grade of my college career in the intro English course entitled Reading Fiction.  Italo Calvino very nearly killed me.  Why would I spend any free moment inside someone else’s imagination when I could go dancing, see a movie, or yak with my roommate?

In June of 1991, just after I graduated, Diana Gabaldon published her “practice novel”, Outlander.  My friend Jess suggested that I might like it.  I did.  Over the next fifteen years, the Outlander series wove through my life: pre-med classes, medical school, residency, the beginnings of my practice as a family physician, marriage, and the birth of my son.

Back when our love was fresh, when we were consolidating our holdings, Ace innocently asked if we could get rid of my pile of “romance novels”.  I pitched a gigantic fit.  You don’t understand, I said.  These books, these physical tattered pages, reminded me how to read for pleasure alone.  As a compromise, we tucked the massive, mostly hardcover tomes (Gabaldon appears incapable of writing a short book) behind the first row on the bookcase.  “Because, really.  Are you going to be reading them over and over?” Ace asked.

Why yes, in fact.  I first started the series when I was in my twenties, just contemplating a medical career, much like protagonist Claire, a combat nurse.  A couple books down the road and Claire attends medical school.  Further still, and she writes from the perspective of a forty-year-old mother of an only child.  Gabaldon offers something for everyone at any stage of life beyond childhood.

I took a brief break from the series shortly after The Big E’s birth, tripped up by the unwaveringly realistic violence of A Breath of Snow and Ashes.  I (stupidly) wrote to the author, affirmed my never-ending adulation, and requested a PG-13 version of events.  She (unbelievably) wrote back, thanked me for my patronage, and (basically) said, “Life in the 1700s was tough.  Suck it up.”

Numerous directors have attempted to turn Outlander into a movie.  Gabaldon played her cards properly in creating books that $ would $ be $ optioned $ repeatedly and finally turned into a television series, unconstrained by the limitations of the film ratings system.  In anticipation of summer 2014 on Starz (and me without cable), I’m hip-deep in the series yet again.

Claire Randall Fraser will still be standing, in all her wild-haired post-feminist glory, her unreasonably sexy, kilt-clad, warrior husband at her side.  And I’ll be right there with her.  Over and over and over.

Thank you, Diana Gabaldon, for teaching me to read.  Again. 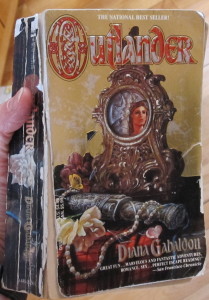 49 Responses to The Joy of Text: How Diana Gabaldon Changed My Life