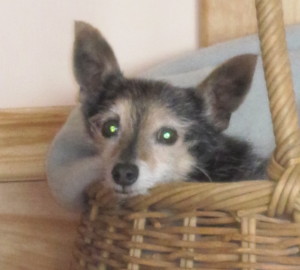 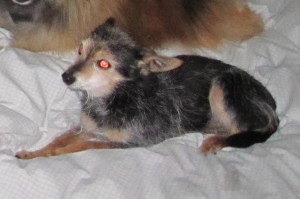 I met Henry for the first time in the winter of 1999.  My housemate’s coworker fostered dogs for Second Chance Animal Rescue and she had a petite chien in her care.  Didn’t I want to meet him?

I grew up with cats – short-haired, no frou, mutt cats.  In the winter of ’99, I somehow decided that I should acquire a dog.  I knew nothing about dogs.  Henry laid eyes on me outside the foster’s house and barked his head off, straining at the leash in an effort to turn my right shin into his new chewtoy.

I said, “Oh, he’s so cute!”  At seven pounds, he was.  I followed the foster into her tiny kitchen whereupon said tiny terrier was released from his chains.  He trotted around, sniffed, and, I kid you not, walked up to me and laid his head in my outstretched hand.

I paid $90 for Henry and promptly (erroneously) named him Phillip.

Back to the biting.  I used to say “Oh, but he’s never broken skin.” till I realized how completely ridiculous I sounded.  I eventually learned (after a decade or so) to simply announce “He bites.” whenever anyone gets within a half-mile radius of Henry.  Most people back off.  Those who don’t learn that Henry never breaks skin.

Henry also pees.  You’re thinking, great, he has a functioning urogenital tract.  Yip-pee!  Henry pees in the house.  Naturally, I consulted the vet who assured me that he’d just been fixed (Henry, not the vet) and the problem would resolve itself in a couple weeks.  It didn’t.

The vet insisted on muzzling Henry during office visits.  I fired the vet.

I bought kegs of Nature’s Miracle.  I kenneled Henry when I wasn’t home.  I diligently cleaned the pee off the wall next to the kennel each night.  I tried a smaller kennel and found Henry cowering in a puddle upon my return.  A midday walk didn’t help.  We tried anti-anxiety drugs (both of us) and dog park socialization (H was mistaken for a rodent) and positive reinforcement and shoving his nose in it and dog school (H flunked out) and scheduled toileting and negative reinforcement.

Shortly after my future spouse suggested we should “run the race of life together”, I adopted Teddy, a twelve-year-old crotchety Pomeranian.  Teddy bit.  Teddy broke skin.  But Teddy did not pee in the house.  The wedding proceeded as planned.

Enter THE BELLY BAND.  I can’t remember who told me about this nondescript rectangle of fabric.  The nice lady at Petco helped me find one in an appropriate size (teensy) and configuration (male).  Off the record, she suggested using maxi pads in the band instead of the grossly overpriced disposable doggie diapers.  I thanked her profusely and our lives profoundly changed. 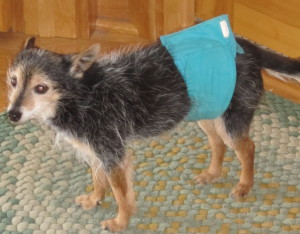 Why did I keep a dog who bites and pees and hates pretty much everyone but me?  Henry waltzed into my life and offered me unconditional positive regard, blind devotion, and absolute love.  He walks with me in darkness and in light.  I am his person.  He is my dog.

And so I happily fill my cart with Target maxi pads (overnight absorbency, with wings).  They’re not for me, I say.  They’re for my dog.  My bad beloved dog. 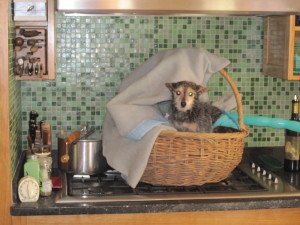 This entry was posted in Blog and tagged dogs, Henry, love, rescue dogs. Bookmark the permalink.