I’m not exactly sure why I thought the night before picture day was the right time to cut my son’s hair.  The haircut had completely slipped my mind, like a floundering eelpout, all slimy and under-pigmented.

I set him up at the kitchen island, ask him what he wants to watch on YouTube.  ”Type in ‘duck calling’,” he says.

I take a deep breath, say a silent prayer to the god of the modified mullet, and set to work.  I start in front, the bangs, while I’m still sort of fresh.  An inch and a half drops to the counter in front of him.  “Mama – that’s too much!”

Too late baby, now it’s too late.  I make up something reassuring – I always take this much off, it just looks like a lot when it’s piled up on the soapstone slab.

We listen – he listens – to wood duck calls.  This is how to tell them everything’s okay, just fly a little lower.  Here’s an eating call – come on down, Hank, the water’s fine.

The video sucks.  He skips to the grand quack fest finale.  Snip.  I scoop the hair into a sizable pile.  He strides into the bathroom, hops on the toilet lid, and peers in the mirror.  Silence.

He wanders out of the bathroom as I tape shut the business size envelope of his shorn locks.  “Mama.  I like it better when the sides aren’t quite this short, so it kind of goes into the back.  But it’s pretty good.”

Noted.  I date the envelope and tuck it into his baby book.  Someday I’ll be able to stuff a pillow.

We snuggle at bedtime and I surreptitiously fluff his damp hair.  For a split second I consider product application in honor of picture day.  No.  I love my boy’s pragmatic approach to his appearance.  Tomorrow he’ll look the way he always looks: uncombed, rumpled, and well-loved.

Maybe he’ll even quack for the photographer.  Come on down, Hank.  The water’s fine. 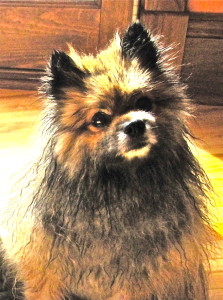 This entry was posted in Blog and tagged parenting. Bookmark the permalink.

2 Responses to The Water’s Fine